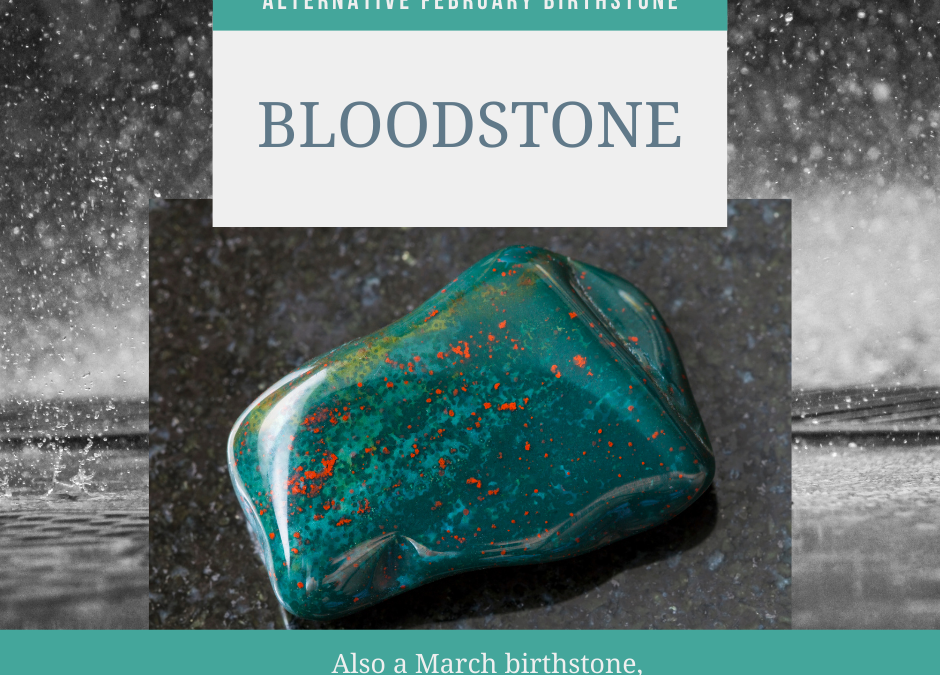 Whoever bears this stone, … will find all doors open, while bonds and stone walls will be rent asunder.

Bloodstone was once known as the “Stone of Freedom”.  Viewed as a rare gemstone in the ancient world, it was thought to break chains and tumble down walls.  At first glance, it looks like jasper, even being called blood jasper or green jasper sometimes, but it is really a variety of chalcedony.  The red spots give it the appearance of being speckled with drops of blood, therefore the name “bloodstone”.

If you see bloodstone in a pool of water, the sun’s rays above it may appear a blood red color. Seeing this, ancient civilizations thought the stone could actually turn the sun a blood red.  This phenomenon explains its other name, heliotrope, from the Greek heliotropion, or “turning sun”.

Although it is an alternative birthstone for February, it is also the traditional birthstone for March.  In modern times, aquamarine has replaced it as the main March birthstone.

It is sometimes called the Martyr Stone.  Medieval Christians carved crucifixes and martyrs in the stone.  Legend was that it was created by the blood of Jesus dripping onto the jasper at the foot of the cross.  In truth, it has been valued and used much longer.  Mentioned in ancient Greek manuscripts and used in Mesopotamia, bloodstone, as well as turquoise, carnelian, and lapis was one of the first gemstones used by man.

Known as a protection stone, it is thought to help boost passion, strength, and vitality.  It is also thought to be closely tied to the blood and has been used to purify kidneys, liver spleen and boost the immune system by eliminating toxins. It is also believed to help fight acute infections, help with circulation and blood flow.

Bloodstone comes in various grades.  Stones with a deep forest green with a spray of red dots are the most popular, so the most valuable.  One of the few gemstones found in Scotland, it can also be found around the world, but the highest quality stones come from Australia, India, Madagascar and Brazil.